Divided into 25 districts, TxDOT aims to deliver safe and reliable transportation throughout Texas. The San Antonio District covers 12 counties in the south-central part of the state, home to over three million people.

Wrong-way driving collisions kill a whopping 300 to 400 people each year in the United States, according to the Federal Highway Administration (FHWA). While wrong-way collisions account for only one percent of annual traffic-related fatalities, they are disproportionately deadly because they are head-on.

Like in many cities, wrong-way driving was a serious problem in San Antonio, Texas. When an on-duty police officer was struck and killed by a wrong-way driver in 2011, the Texas Department of Transportation (TxDOT) for the San Antonio District knew it needed to take immediate action.

“Everybody in town wanted answers pretty quick, so we started actively looking into what we could do to combat the issue,” says John Gianotti, TxDOT Transportation Engineer for the San Antonio District.

The San Antonio Wrong-Way Driving Task Force was formed to determine where and how often wrong-way driving was occurring, as well as what safety solutions were available. After a year of data collection, the task force identified 274 wrong-way driving events, which resulted in 19 crashes and seven fatalities.

The data also revealed that nearly three-quarters of crashes occurred at night and a 15-mile stretch of U.S. Highway 281 was a hotspot for wrong-way driver activity. With this actionable insight, the district began searching for a solution capable of grabbing wrong-way drivers’ attention, no matter the light or weather conditions.

A whopping 300 to 400 people die in wrong-way crashes each year in the United States, according to the Federal Highway Administration (FHWA)

Wrong-Way LED-Enhanced Signs
“When we started looking for solutions, we contacted TAPCO to see what they could offer,” says Gianotti, who was then introduced to the TAPCO LED-Enhanced Wrong-Way BlinkerSign®. “We found something that was readily available, affordable and we could buy right away.”

The Wrong-Way BlinkerSign® is a popular starting point for wrong-way driver prevention. It consists of eight flashing LED bulbs embedded in the sign, a solar panel, a control unit and a battery unit. The signs can flash 24/7 or from dusk until dawn, detecting the light conditions around them and dimming accordingly. Gianotti and his team chose the latter option.

Without a specific budget for wrong-way driving solutions, the district used funds set aside for safety projects. Ultimately, the district installed 56 Wrong-Way BlinkerSigns on 26 U.S. Highway 281 exit ramps in 2012, integrating them with its Advanced Traffic Management System (ATMS), LoneStar.

“The flashing Wrong-Way [BlinkerSign®] has been a tremendous help to us,” Gianotti explains. “They have been twice as successful as I ever thought they would be. It’s very helpful to an organization like us that cannot always respond with new innovative ideas and products like TAPCO can.”

Wrong-Way Detection
While the district’s initial installation featured only BlinkerSigns, within just a few years detection systems began to advance technologically and grow in popularity, so the district began looking into its options. Gianotti and his team decided on a varied approach, selecting multiple detection methods from TAPCO and others to test at different locations.

Some locations feature radar detection. Other areas use underground pods normally used for detection at traffic signals. Two locations leverage FLIR thermal detection from TAPCO, and the district plans to expand that technology to more ramps soon. A recent TAPCO innovation has even combined FLIR and radar detection to optimize both efficiency and accuracy.

Gianotti and his team decided where to place new detection equipment by tracking wrong-way events reported in San Antonio via 911, then creating a heat map of those events to find wrong-way driving hotspots. All detection methods activate TAPCO BlinkerSigns.

“Whenever we had the budget for it, we picked up another type of detection,” Gianotti says. “We’re studying them and comparing them against each other to see what works. Other districts around the state are doing the same thing.”

In fact, some districts have used San Antonio’s many years of successful wrong-way driving reduction efforts as a model for their own district.

Bringing It All Together
“We’ve got detection on a lot of ramps because you never know when people are going to drive the wrong-way on which ramp,” Gianotti explains. “And we always want to cut down on false positives. We’ve had nothing I would consider a false positive so far when utilizing thermal detection.”

Reducing false positives is a major benefit of the TAPCO Wrong-Way Alert System, especially when it features FLIR thermal activation. In a pilot program testing wrong-way solutions from five vendors – including TAPCO – at 300 off-ramps, the Colorado Department of Transportation (CDOT) found 99 percent of false positives were from other vendors’ solutions.

The TAPCO Wrong-Way Alert System operates by establishing two zones. The first zone is the sign activation zone in which FLIR thermal sensors detect a wrong-way vehicle. This activates the alerts located in the second zone, the wrong-way alert zone.

If drivers don't turn around, they are monitored by thermal sensors and a high-speed camera for next-level precision and accuracy in all weather and light conditions. Information about the incident – such as time and location and the vehicle’s color, make and model – can then be delivered to BlinkLink®, traffic device-monitoring software powered by TAPCO, or to an ATMS like LoneStar via API integration.

When budget is not available for detection equipment, the district simply installs Wrong-Way BlinkerSigns on their own.

“This way, we get broad wrong-way safety coverage without having to do much else, and the cost of those signs in relation to the projects is usually negligible,” Gianotti says. 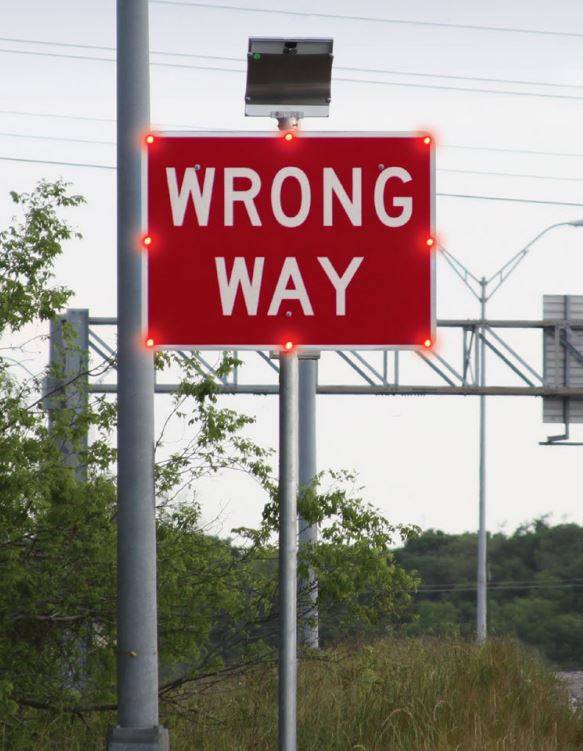 "The flashing Wrong-Way [BlinkerSign®] has been a tremendous help to us. They have been twice as successful as I ever thought they would be." 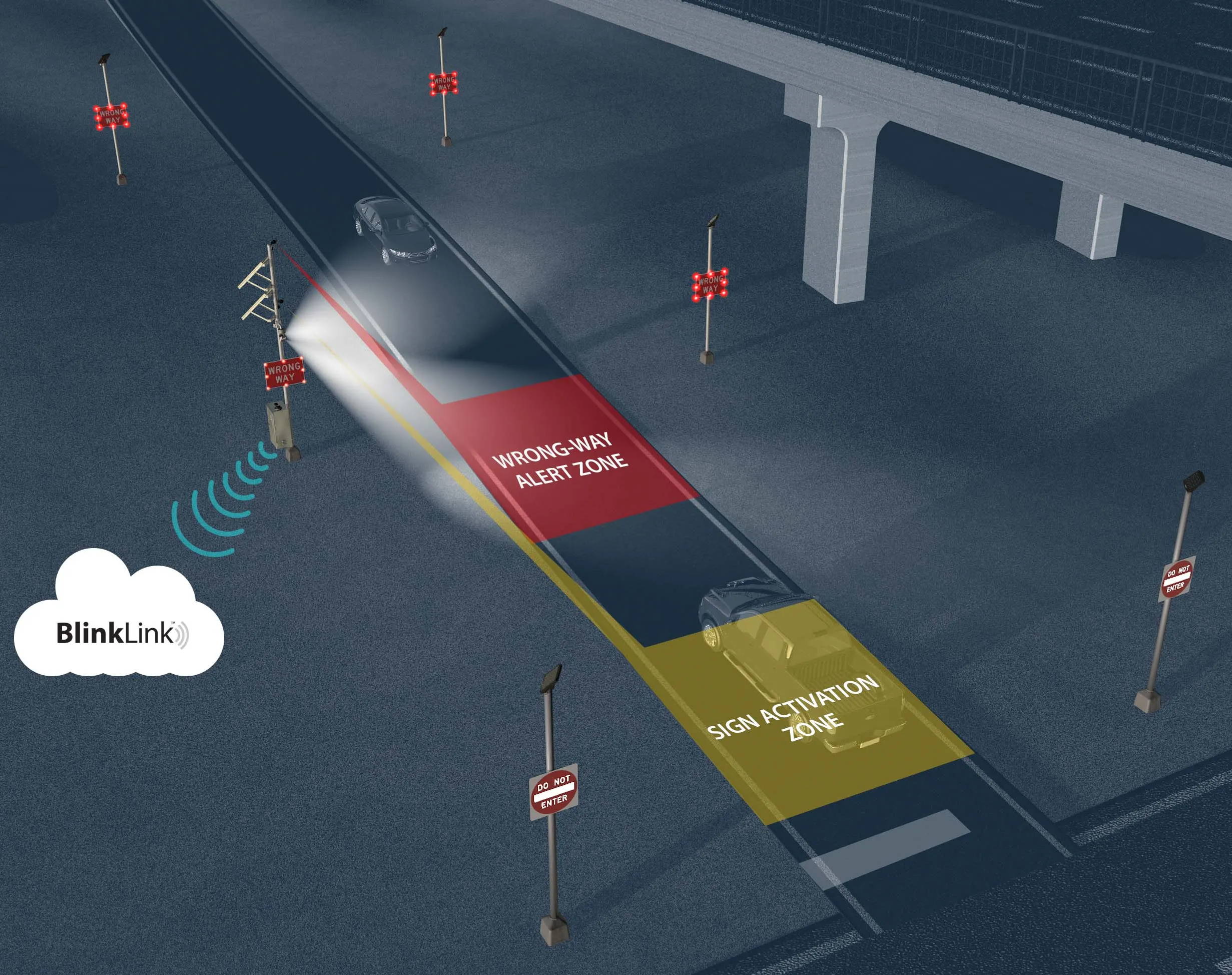 Nearly a decade after the TxDOT San Antonio District’s first BlinkerSign® installation, the district continues to install BlinkerSigns on their own and as part of TAPCO Wrong-Way Alert Systems, taking advantage of multiple detection methods. All have been working as intended, leading to a significant reduction in wrong-way driving events.

"We have about six years of good data that shows, on the US-281 corridor, about a 30 percent reduction in the reports of wrong-way calls,” Gianotti explains.

That equates to many injuries prevented — and many lives saved. The TAPCO wrong-way solutions have even generated an annual cost savings of $248,680 because less collisions mean less time and resources needed from first responders and cleanup crews.

“Once we saw these results, we started putting Wrong-Way BlinkerSigns everywhere else,” Gianotti explains. “We have put these signs on IH-10, IH-410, IH-35 and some of our other major highways around town where we know we’ve had wrong-way issues.”

There are now approximately 150 TAPCO LED-enhanced Wrong-Way BlinkerSigns strategically placed on San Antonio highways – some paired with FLIR thermal or detection from TAPCO – and that number continues to grow. The district’s efforts prove that, with a bit of research and the right vendor, any community can tackle wrong-way driving and save lives.

“Generally, if we get any comments about the [TAPCO wrong-way solutions], they’re positive,” Gianotti adds. “The public doesn’t comment much, but when they do, they always ask, ‘Are you putting up more?’”

"We’ve had nothing I would consider a false positive so far when utilizing thermal detection.”

Since 2012, Departments of Transportation and traffic engineers have turned to TAPCO Wrong-Way Alert Systems to reduce wrong-way driving events.