We are in the process of upgrading our system and you may experience a temporary delay in web order processing. Thanks for your patience. Contact us with any questions.

Because the Memorial Boulevard area in Hagerstown, MD used to be a swamp, it is often subject to dangerous flooding. With an old clay pipe system and only one storm water collector, the town needed a reliable, cost-effective safety solution, so it turned to TAPCO.

Established nearly 300 years ago, Hagerstown in northern Maryland has a population of 40,000 and is the county seat for Washington County.

About a dozen times each year, water covers Memorial Boulevard in Hagerstown, Maryland, cutting off the two-lane thoroughfare lined with businesses — and creating a major safety hazard. In fact, flash floods kill about 127 people in the United States each year, and half of those deaths are vehicle-related, according to the National Weather Service (NWS).

On each side of the roadway near an underpass are markers that indicate the depth of the water in feet. Despite this, some drivers – including a school bus driver and police officer – were still attempting to pass through when the road flooded. Unfortunately, just six inches of water can make a road dangerous, and a foot or more can sweep a car right off it.

However, addressing the flooding problem was far from simple. The area used to be a swamp, so a vitrified clay pipe was constructed in the 1920s below a sewer line to mitigate flooding. The pipe’s joints were deliberately not sealed to allow groundwater to collect inside the pipe, but, after nearly a century of use, the pipe was clogged with debris.

In addition, during heavy rainfall the water simply could not drain through the pipe system fast enough, and much of it ended up in the town’s only storm water collector. When the collector became too full, flooding was inevitable.

The town had to resort to blocking off the roadway near the underpass using traffic cones and emergency vehicles, which took time and resources — especially risky during flash floods when every second counts. The roadway’s configuration and budget constraints didn’t allow for the installation of gates, which can only partially block the road anyway to allow for first responder access.

“The only other solution was some kind of pumping system, but we didn’t have $100,000 to spend,” says Eric Deike, Director of Public Works for Hagerstown. “It just didn’t make any sense financially. I looked around for a system and we even designed a couple things, but they were all pretty expensive.”

More than half of flood-related drownings occur
when someone drives into hazardous water, according to the National Weather Service. 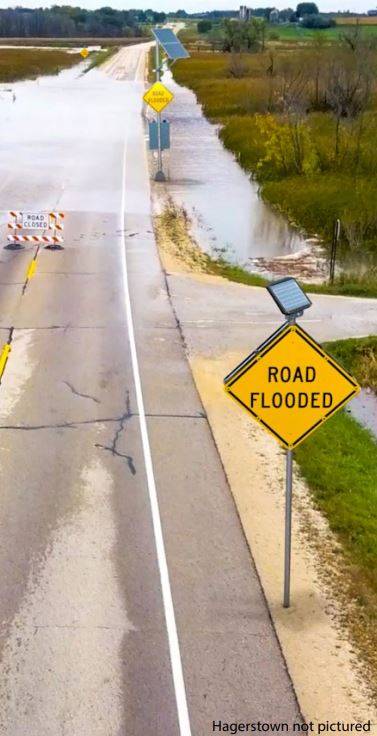 After spending years on the hunt, Eric encountered a representative from a traffic safety product supplier who happened to have a brochure featuring the TAPCO High Water Warning System.

“I was at the right place at the right time,” Eric says, adding that the TAPCO system checked virtually all his boxes.

It has an adjustable water level sensor that accurately detects rising water in real time, activating weatherproof LED-enhanced warning alerts. Unlike static signs, the alerts grab drivers’ attention when danger is imminent, preventing them from becoming white noise. When the water recedes, that triggers the alerts – either signs or beacons – to automatically turn off.

On top of costing a fraction of other high water solutions, the system protects lives, prevents vehicle and infrastructure damage, lowers insurance premiums and frees up first responders’ time and resources during inclement weather.

Crucially, the TAPCO system is also customizable. Due to a low-hanging underpass, the usual dual radio system wasn’t going to work on Memorial Boulevard; the radios couldn’t “see” each other to communicate. Eric and his team worked with TAPCO to integrate a third radio with the system, providing three points of contact for communication.

“The system had to be designed a little bit differently, so it was customized by TAPCO,” Eric says. “We had to figure all that out and they helped us do that.”

For the warning alerts, Eric and his team selected solar-powered BlinkerSigns, which are MUTCD-compliant, LED-enhanced signs created by TAPCO. They’re placed on three poles ahead of the high water area so drivers have the time and space to turn around. A wall-mounted sensor detects when the water reaches a certain threshold and triggers the
flashing BlinkerSigns.

For software, Hagerstown has BlinkLink®, traffic device-monitoring cloud software powered by TAPCO. It sends email and text alerts when high water is rising or receding and makes remote management easy.

The local public works staff installed the system, and Eric says the process went well, with the TAPCO team being responsive and accessible. The town was also fortunate to receive funding for the majority of the High Water Warning System from the Maryland Emergency Management Agency (MEMA).

Everything was coming together for Hagerstown.

"The system had to be designed a little bit
differently, so it was customized by TAPCO." 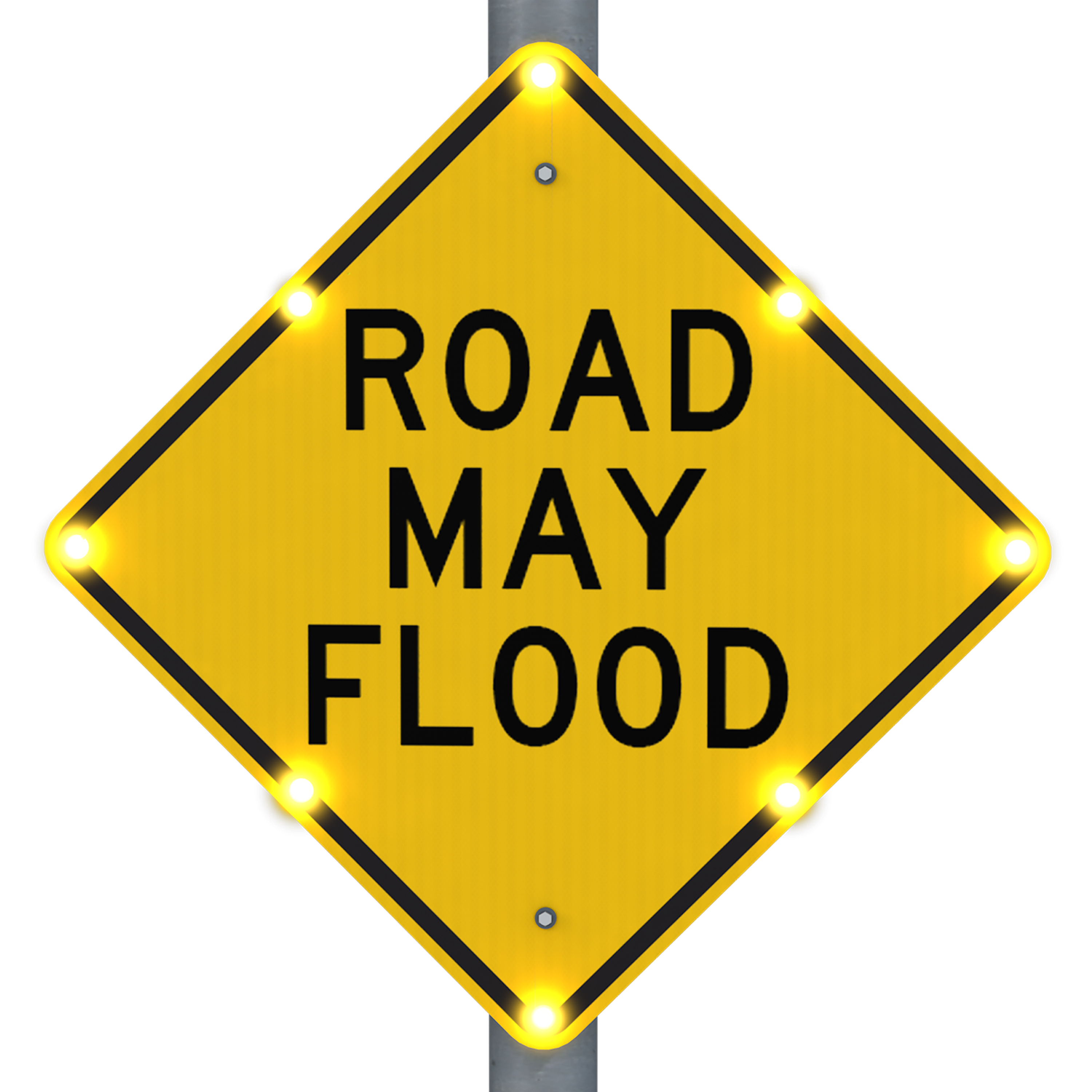 According to Eric, the new system has made a significant difference in alerting the public to dangerous high water. The flashing lights activate immediately, the sensors are highly accurate and maintenance is minimal.

“We might not have any barriers in place for awhile, but drivers do get a flashing warning immediately and in real time now,” Eric says. “We’ve done what’s reasonable to warn the public of a dangerous situation, so it helps them stay safe and reduces our liability. Cities have been sued because someone got injured or their car got stuck in flood waters.”

Critical to the system’s success is the BlinkLink® software, which requires little of Eric or his team. They simply subscribe to the service, and TAPCO handles the rest, providing periodic upgrades and even sending warnings about any upcoming maintenance needs. With so many other demands on Eric’s time, having a high water warning system that largely takes care of itself has been invaluable.

He also emphasizes the system’s cost effectiveness in both the short- and long-term — always a significant factor when taxpayer dollars are concerned.

“I would definitely recommend the TAPCO system as a lower-cost way of informing the public,” Eric says. “Anything beyond this gets expensive. You put in automatic gates and you’re talking 15 to 20 thousand dollars on one gate. When we needed something different, TAPCO was there.”

"When we needed
something different,
TAPCO was there."

Utilizing a combination of fiber-optic, float and pressure sensor technology provides system flexibility to fit the geographical layout of any area