This article was posted by Steve Paulus on August 12, 2016

Every day, approximately 90 people die from motor vehicle accidents in the U.S., which is why our country ranks last among the 19 high-income nations analyzed in the latest Vital Signs report by the Centers for Disease Control and Prevention (CDC).

Since the beginning of our nation’s paved roadways, motor vehicle safety has remained a top priority for everyone in the transportation industry. And sadly, the reduction in U.S. crash deaths has lagged behind other comparable countries.

From 2000 to 2013, the U.S. reduced crash deaths by 31 percent. while other high-income nations averaged a 56 percent reduction, with Spain ranking the highest at 75 percent.

“It’s unacceptable for 90 people to die on our roads each day, especially when we know what works to prevent crashes, injuries and deaths,” said Erin Sauber-Schatz, Ph.D., M.P.H., transportation safety team lead at the CDC’s National Center for Injury Prevention and Control. “About 3,000 lives could be saved each year by increasing seat belt use to 100 percent, and up to 10,000 lives could be saved each year by eliminating alcohol-impaired driving.”

Compared with the other nations in the Vital Signs report, the U.S. has:

So what can be done? Check out what drivers, passengers and states can do to improve safety on our nation's roadways. 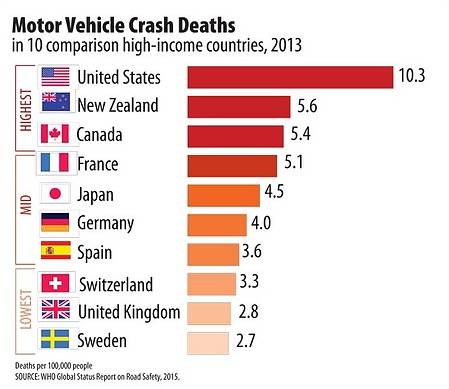