This article was posted by Steve Paulus on November 30, 2016

Horizontal curves are few and far between, yet account for one-quarter of all highway deaths in the United States, with the root causes being unfamiliar driver error and in-curve speeding.

The new study looks to build on the momentum of the initial highway curve analysis, Evaluation of the Sequential Dynamic Curve Warning System, conducted by the FHWA’s Highways for Life program. 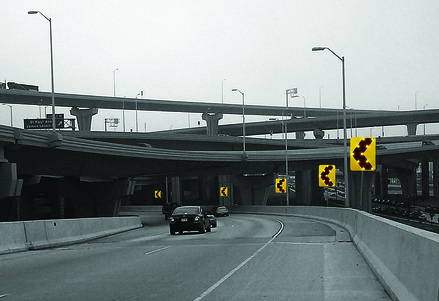 The systems consist of solar-powered, LED-enhanced flashing chevrons installed throughout the length of the curve and connected via wireless technology. Approaching vehicle speeds trigger the system to activate the LED-enhanced chevrons to flash sequentially, alerting drivers to slow down.

“These systems are meant for drivers who are unfamiliar with the road they are driving on,” said Brian Scharles, Lead Intelligent Warning Systems Engineer at TAPCO. “The system alerts drivers traveling above the posted speed limit who may be unaware an upcoming curve is ahead where quick speed reduction is needed to safely navigate through the curve.”

Why is a new study needed?

“What we are trying to find out is if we increase the activation method by five and ten MPH and the flash rate frequency, can the system be even more effective?” Scharles said. “In the original study, if the vehicle was traveling faster than the posted speed limit when approaching the curve, the system would activate a sequential flash pattern at the rate of one flash per second."

For this study, four different real-time scenarios were analyzed:

BlinkerChevron™ Dynamic Curve Warning Systems were installed at the three most accident-prone 55 MPH two-lane rural highway curves in Wisconsin, as determined by the Wisconsin Department of Transportation.

Goal of the study

The goal was to analyze the change in speeding and driving performance based on the different activation methods, flash patterns (sequential or simultaneous) and flashing frequency rate of the BlinkerChevrons™ in search of the optimal setting for the BlinkerChevron™ Dynamic Curve Warning System.

Results of the study

The study was conducted under the direction of Eric Donnell, Ph.D., P.E., Professor of Civil Engineering at Pennsylvania State University, with results expected to be finalized and released by spring 2017.

The Safe Travel's blog will be releasing the results of the study as soon as the results are published. Subscribe below to get the results sent to your inbox!