This article was posted by Steve Paulus on May 4, 2016

A recent study conducted by carinsurancecomparison.com has ranked the most dangerous drunk-driving states in the country.

The study factored in public statistics provided by the National Highway Traffic Safety Administration (NHTSA), Federal Bureau of Investigation (FBI) and Mothers Against Drunk Driving (MADD), among others.

The study concluded the five most dangerous states for drunk-driving are: 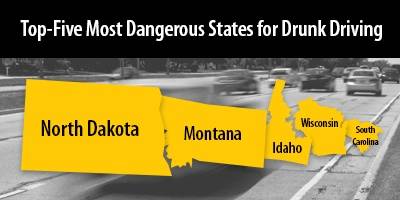 In TAPCO's home state of Wisconsin, a large portion of its poor ranking was due to having too lenient DUI penalties.

Wisconsin Governor Scott Walker signed new legislation into law in late April to strengthen the penalties for drunk-driving offenders to combat the state's weak stance on the issue.

The most notable change now makes a fourth drunk-driving offense a felony in Wisconsin, whereas previously a fourth offense was only considered a felony if it was committed withing five years of the third offense.

However, even with the new legislation, Wisconsin's drunk-driving laws remain weak in comparison to other states, as it is the only state where a first drunk-driving offense is not a crime.

Want to find out how tough your state's drunk-driving laws are? Check out this graph by the Governors Highway Safety Association for a state-by-state comparison.