This article was posted by Nick Schmidling on August 5, 2019

Horizontal curves are some of the most dangerous sections of road, whether they are located on interstates or rural two-lane roads. Curved stretches of road comprise a small percentage of all road miles, but they are associated with a quarter of fatal crashes.

According to the U.S. Department of Transportation, “The average crash rate for horizontal curves is about three times that of other highway segments.”1 About 75 percent of such crashes are speed-related and involve “a single vehicle leaving the roadway and striking…fixed objects or overturning.”1  As a result of such startling statistics, there is a plethora of possible tried and tested solutions with the aim of reducing the dangers of horizontal curves.

The most basic countermeasure is traditional signage. The Manual for Uniform Traffic Control Devices (MUTCD) designates a wide variety of curve signs as optional, recommended and required, depending on the difference between the speed limit and the advisory speed for the curve.2  Some of the most common signs are listed below:

But there are two problems with the sign-only approach. First, such signs are so common their impact on driver behavior lessens over time. The second problem involves speed advisory plaques in particular. According to the National Academies of Sciences, Engineering, and Medicine, speed plaques paired with one of the above signs were no more effective than the curve signs alone and, in one study, correlated with acceleration as often as deceleration.3

In short, drivers know their vehicle can safely navigate a given horizontal curve at a higher speed than a sign advises, so they ignore the sign. But, given the prevalence of crashes and fatalities at horizontal curves, it's clear drivers are still trying to navigate those stretches of road at unsafe speeds. To address this problem, A Guide for Reducing Collisions on Horizontal Curves recommends advisory speeds be recalculated based on current technology and scientific calculations.3

One road treatment that has successfully reduced run-off-road (ROR) crashes on horizontal curves is the use of rumble strips on the road shoulder. Their presence has, according to one study, reduced ROR incidents by 20 to 30 percent on rural freeways.3 While this sounds promising, it should be noted that the study included both straight and curved road segments. Little is known about how effective shoulder rumble strips are on horizontal curves. Potential disadvantages to the use of rumble strips include their incompatibility with bicycle traffic and their negative impact on pavement life.

At a scientific level, ROR events on horizontal curves occur when the friction achieved from the tires’ contact with the road surface is less than that required to overcome the centrifugal force directing the car to travel in a tangent rather than in an arc matching the roadway. It stands to reason, then, that increasing the friction decreases the likelihood of road departure.

One roadway improvement that increases the adherence of tires to road surface is called High Friction Surface Treatment (HFST), the addition of a durable polymer to the pavement sealed by a binding agent.4 The treatment was applied to an interstate ramp in Milwaukee, Wisc., where the number of crashes was reduced from 79 per year over a three-year period to “two crashes in the first year after applying the friction treatment.”4

HFST was also applied to a curved interstate bridge in Cedar Rapids, Iowa, where one year after application it had reduced crashes from an average of over ten per year to just four in the 12 months after application4. Such dramatic crash reductions clearly demonstrate HFST's ability to improve traffic safety.

The costs associated with HFST, however, are high. Disruptive lane closures are required. The mixture of polymer and high-friction material must be very precise and could require the hiring of outside contractors familiar with the materials. And at $20 to $35 per square yard, HFST may be too pricey for some budgets.4

More recently, advanced technology has been used to combat the high accident statistics on horizontal curves. On multi-lane highways, variable message signs have been deployed to alert drivers when their speed exceeds the advisory speed for an upcoming curve. A speed sensor above each lane (right) runs an algorithm and determines if the approaching vehicle is exceeding the advisory speed. If so, the sensor activates a variable message sign over that vehicle’s lane, advising the driver to slow down (below). This kind of system has been successful in lowering vehicle speed in horizontal curves to a statistically significant degree and to a greater extent than static signs.1 One driver survey indicated 95 percent of drivers noticed the sign and 76 percent slowed down.1 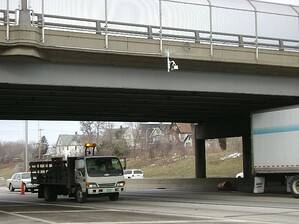 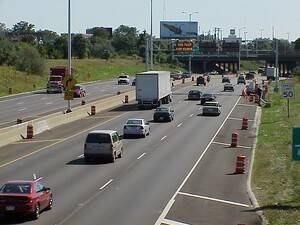 A particular challenge associated with the use of dynamic message signs is making sure the messages are only displayed to cars exceeding the advisory speed. If drivers experience multiple false alerts, they will ignore the messages in the future. Further, different types of vehicles can safely negotiate a curve at different speeds. A compact car, for example, can travel through a horizontal curve at a greater velocity than a van, a semi-trailer must slow to a lower speed than a pickup truck and so on. Thus, the speed sensor must be able to determine not only vehicle speed, but also the type of vehicle approaching given the geometry of the curve.

Fortunately, new triple-beam technology can make such determinations. This technology is far superior to single-beam versions. The triple-beam detection system uses Doppler radar and can recognize eight different vehicle types with 99.5% accuracy (below). Many other sensors calculate only the height of the approaching vehicle. 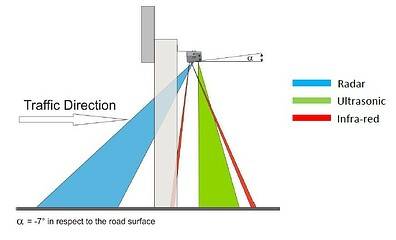 Another way to combat the relative ineffectiveness of static signs is to make them dynamic instead. In many states, chevron signs have been enhanced with solar-powered LED lights that flash when a vehicle is detected exceeding the recommended speed for the horizontal curve (below). In one study in Wisc., TAPCO’s BlinkerChevron™ Dynamic Curve Warning System proved 97% effective in reducing crashes. An advance curve warning sign, which may also be enhanced with LEDs, is equipped with a radar speed detector with a range of 300 feet. When an approaching vehicle exceeds the advisory speed for the approaching horizontal curve, the detector wirelessly communicates with the chevron signs arrayed along the perimeter of the curve, triggering them to flash simultaneously or in sequence, depending on how they have been programmed.

Dynamic curve warning systems have proven effective on urban interstates and rural two-lane roads alike, but they are especially suited to rural roads. They are solar-powered, so no local power is necessary. And lighting on such roads can also be lacking, making the flashing LEDs more noticeable (below).

The disproportionate number of crashes and fatalities on rural roads has received more attention recently, even at the federal level. Nicole Nason, recently nominated to head the Federal Highway Administration, noted that in 2017, 47 percent of road fatalities occurred on rural roads, even though only 19 percent of the population lives in rural areas.5 “My priority is safety on all roads,” Nason stated, “but we must recognize and address some of the unique safety challenges faced by rural communities.” 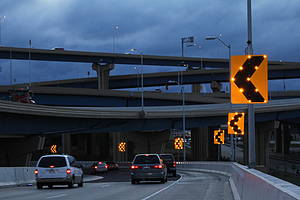 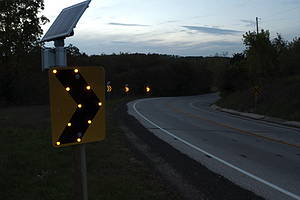 A study of 12 rural, two-lane horizontal curves in five states was conducted by the Center of Transportation Research and Education in 2015.1 The particular stretches of road were chosen based on a number of factors, including speed limit, the existence of static chevron signs, crash statistics, advisory curve speed and average daily traffic.

Five different flash patterns and two distinct flash frequencies were tested. Overall, the sequential dynamic curve warning system was effective in reducing the percentage of vehicles exceeding the curve advisory speed, ranging from an 11 percent reduction to a 32 percent reduction. The percentage reduction rose as vehicle speed rose, indicating the system increased in effectiveness as drivers came into a curve at the highest – and, therefore, most dangerous – speeds. As stated in the conclusion of the study, “The results indicate the effectiveness of the SDCWS in reducing speeds and the ability to maintain that reduction over time (2 years after installation).”1 The most effective combinations were the following:

Most importantly, the dynamic curve warning systems produced a dramatic reduction in crashes. The 12 test sites had an overall crash reduction of 58 percent the two years after warning system installation.1

Given the high crash rate at horizontal curves and the high fatality rate associated with such crashes, increasing safety at those locations should be a priority for every organization tasked with keeping roads safe. Since we can’t eliminate curves, nor are there unlimited funds for costly redesigns, many other options have been employed to enhance horizontal curve safety. More recently, advanced technology has shown great potential in slowing drivers down so they can safely negotiate curved sections of the road.