This article was posted by Steve Paulus on February 17, 2016

On Monday, January 25, the Federal Highway Administration (FHWA) announced the termination of the Interim Approval for Use of Clearview Font and immediately discontinued the use of alternate lettering style on traffic-control signs, other than the FHWA Standard Alphabet series.

Issued in September 2004, Interim Approval 1A-5 was implemented “with the goal of improving the legibility of highway signs,” according to the notice published by the FHWA.

However, the Interim Approval was authored “in a way that would allow narrower letter forms," ultimately showing no clear benefit when compared to the original FHWA Standard Alphabet.

The FHWA focuses on the uniformity of all its traffic-control devices listed in the Manual on Uniform Traffic Control Devices (MUTCD).

And although the average motorist will seldom notice the difference of the two fonts while operating a vehicle, it may require an additional glance toward a sign, meaning less of a focus on the road. 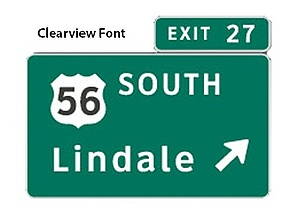 Signs that currently display the Clearview font do not need to be replaced, as long as they comply with the original Interim Approval 1A-5 requirements and remain in good condition. However, when a sign does require replacement, it must use the FHWA Standard Alphabet series. 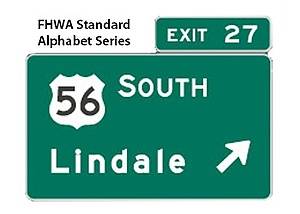