This article was posted by Nick Schmidling on July 15, 2020

With wrong-way driving fatalities a growing problem, thousands of government agencies are searching for the best safety solutions. However, the sheer amount of information – and misinformation – circulating on the topic can be both overwhelming and confusing.

Get answers to your most pressing questions about wrong-way driving and available safety solutions below. 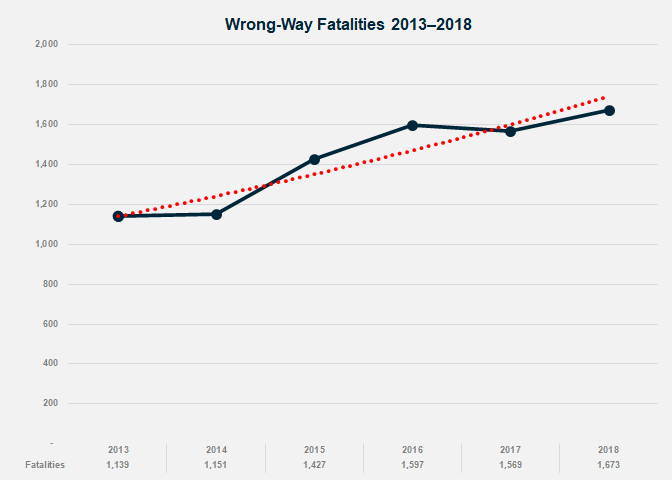 How serious of a problem is wrong-way driving really?

The numbers speak for themselves. There were 1,673 wrong-way driving fatalities in 2018, according to the National Highway Traffic Safety Administration’s Fatality Analysis Reporting System (FARS). That’s the highest number since 2010.

While these fatalities make up a small percentage of overall traffic-related fatalities, wrong-way collisions are disproportionately deadly given their head-on nature.

Major causes of wrong-way driving are impaired driving, distracted driving and lack of familiarity with an area, with incidences tending to increase at night and when the driver is a senior citizen. Wrong-way driving occurs most commonly at highway exit ramps.

Greg Mack, Assistant Director of IT & Toll Systems for the Central Texas Regional Mobility Authority, oversaw his agency’s recent installation of the TAPCO Wrong-Way Alert System at four locations around Austin, Texas. After gathering data on its effectiveness post-installation, he said, “We were surprised at the amount of [wrong-way driving] alerts we’ve had. I think it goes back to this: if you don’t think you have a wrong-way problem, it’s because you don’t have the detection equipment counting it.”

How effective are static signs?

Because they are low in cost, easy to install and familiar to engineers, static wrong-way signs are often used as the first line of preventative defense. However, they have been proven time and again to produce less than satisfactory results.

For example, Arkansas highway officials invested $3 million in roadway markings and static wrong-way signs at all interstate exit ramps in March 2018. However, preliminary data by the Arkansas Department of Transportation shows those efforts were not effective. In fact, the state had nearly double the wrong-way fatalities in 2018 as it did in 2017.

Okay, so what preventative measures should I take instead?

Replacing static wrong-way signs with flashing LED-enhanced signs, which can flash 24/7 or only at night, is a good place to start. The flashing LEDs are attention-grabbing and conspicuous, especially in low light conditions, which is when 71 percent of wrong-way collisions occur.

“The flashing wrong-way [BlinkerSign®] has been a tremendous help to us,” says John Gianotti, TxDOT Transportation Engineer for the San Antonio District. “They have been twice as successful as I ever thought they would be. We have about six years of good data that shows, on the US-281 corridor, about a 30 percent reduction in the reports of wrong-way calls.”

What about responsive measures?

Detecting wrong-way drivers, alerting them that they are going the wrong way and notifying law enforcement in real time requires an innovative and robust solution like the TAPCO Wrong-Way Alert System. A decade of field research, upgrades and expert engineering have made this system the go-to for many departments of transportation and other government agencies across the United States and beyond.

Offering AC and solar power options, the system includes FLIR thermal or radar sensors, a supporting white LED illuminator, a high-speed and high-definition camera, a cellular modem or fiber connection and one of the three LED-enhanced warning devices mentioned above.

Wrong-way alert systems are a popular wrong-way driving solution. They work by detecting wrong-way vehicles using a variety of methods. Detection of wrong-way vehicles then activates flashing LED-enhanced warning alerts, which command drivers’ attention and warn them they are traveling the wrong way.

Wrong-way drivers then have the opportunity to self-correct. After all, the goal of the system is to remediate the behavior before it progresses any further. Then, a high-efficiency LED illuminator and high-definition camera activate to provide high-quality visual verification of the wrong-way event.

If wrong-way drivers continue in the wrong direction past a pre-determined point, most wrong-way alert systems monitor them with thermal sensors and a high-speed camera, ensuring accuracy in all weather and light conditions. In addition, a high-priority alert is transmitted to agencies via cellular modem or fiber optic cable. 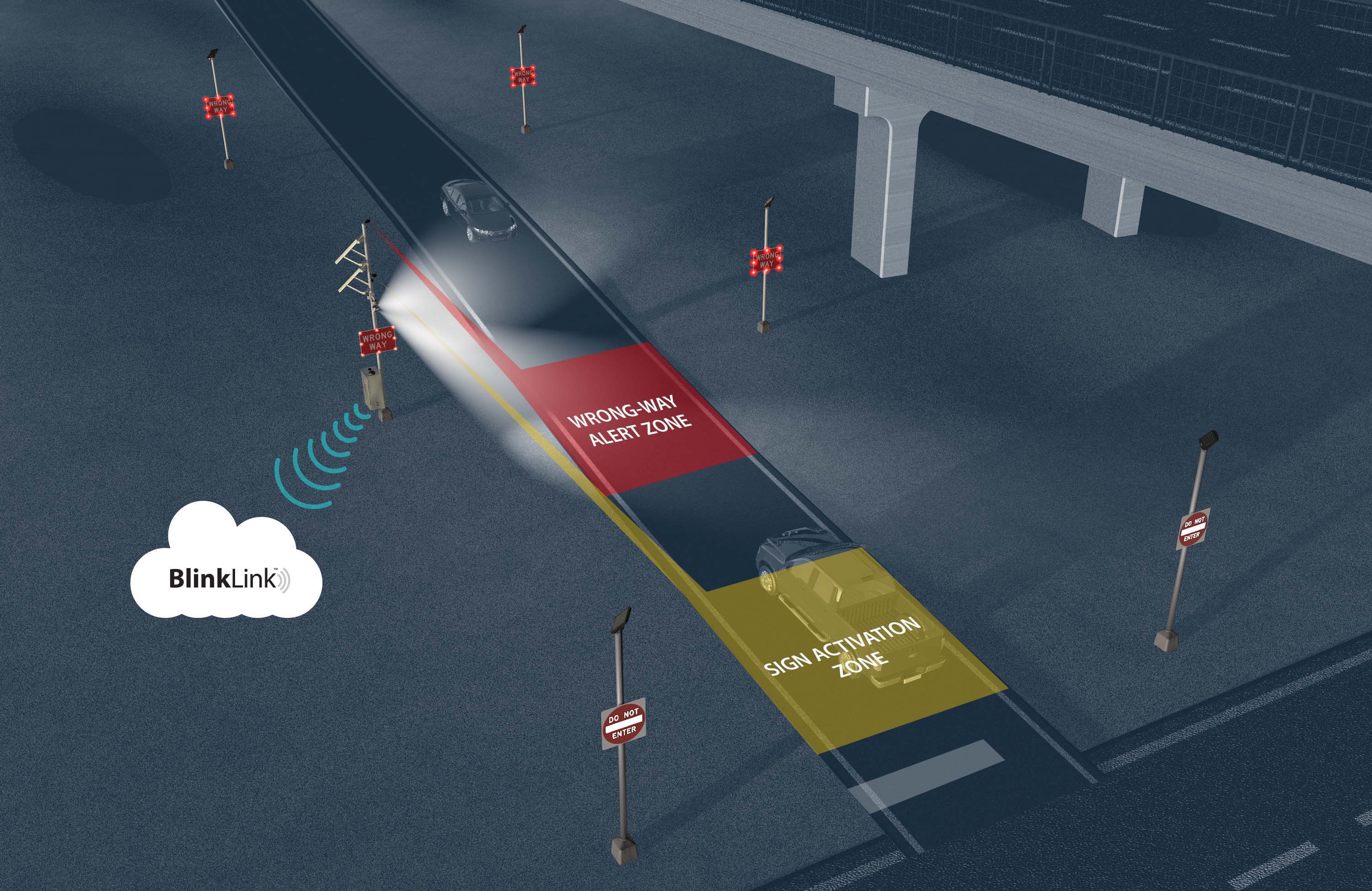 Via BlinkLink® traffic-device monitoring software or an API integration, email and text alerts can be sent in real time to law enforcement that include vehicle and location information for wrong-way drivers in the confirmation zone. This enables authorities to take immediate action, as well as identify patterns and determine wrong-way driving hotspots over time.

What are my detection options? 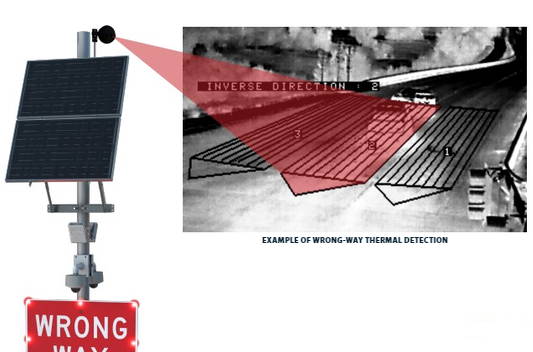 Thermal detection minimizes false positives more than every other detection method with a highly accurate detection algorithm that tracks and deciphers the heat profile of objects. Thus, thermal detection is impervious to low light, shadows, sun glare and unfavorable weather conditions like rain and snow.

The sensors also detect directionality – meaning they activate only when vehicles approach them – and/or presence.

Preferred for interconnected ITS systems, thermal detection captures vehicle color, make and model and the time and location of the wrong-way event. Plus, you can confirm the system is online, connect it to BlinkLink® traffic device-monitoring software and integrate it with connected vehicle systems.

A second detection option is radar detection, an entry-level, vehicle-activated sensor technology TAPCO utilizes for low-priority warning device activation. While radar is generally associated with being low cost, there are inherent limitations with the technology itself. Radar approaches its limitations in complex ramp geometries where nearby on-ramps may produce false positives, generally associated with a Cloverleaf Interchange. Also, radar's capabilities may be exceeded in environments with high precipitation or ramps with a large amount of traffic queuing. Thermal detection is still the best form of detection for these applications.

Finally, a third option is 24/7 or Dusk ‘Til Dawn, which involves no wrong-way driver interaction. LED-enhanced alerts simply always flash or flash when low light conditions are detected, making them more attention-grabbing than static signs but still susceptible to becoming visual white noise over time. This method does not connect to BlinkLink®. While LED-enhanced alerts are far superior compared to the static alternative, they are a simple form of deterrence unable to provide the local site data that is sought with our passive detection systems.

How do thermal infrared sensors produce a visual image that is readable for humans?

Everything emits thermal energy at different rates, including people, engines and machinery. Thermal infrared sensors create images by capturing the amount of thermal energy – not visible light – being emitted and converting it into a visual image for our viewing and detection needs. This is effective because, though we may think an area is one cohesive temperature, it is actually a mosaic of subtly different temperatures, and even a degree difference of .018°F will be captured by the sensors.

In addition, while they emit less thermal energy than traditional combustion vehicles, electric vehicles still emit enough heat for the sensors to identify and detect.

Thermal infrared sensors may initially cost more than other detection technologies, but their precision and reliability reduce costs associated with false calls and maintenance. Over the lifespan of the system's operation, the ROI will always exceed the payback of a lower-class detection system. Most importantly, public safety is maximized through better detection and insightful data used to address deadly wrong-way driving.

Why do I need event management software? 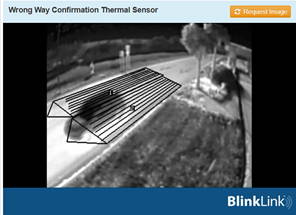 BlinkLink® can even integrate with your local Traffic Monitoring Center’s ATMS software for additional upstream routing and logical commands, as well as offer secure API integration via cellular modem or local fiber networks. Easily connect it to your third-party system and ITS equipment, such as dynamic message sign (DMS) boards, CCTVs and more.

You can also use system health and diagnostics for operation confirmation and maintenance resource planning, and take advantage of scalable system architecture for budget-friendly adoption that minimizes arterial system overhauls.

There is a reason TAPCO is often called on to replace other companies’ wrong-way safety solutions after they have proven ineffective. TAPCO was one of the first companies to develop a comprehensive wrong-way alert system and has now completed 750+ system installations in the United States and Canada since 2011. In fact, the TAPCO system detected a total of 387 wrong-way vehicles in 2019, which equates to many saved lives.

The system is also proven to keep false positives low. For example, the Colorado Department of Transportation (CDOT) piloted wrong-way solutions from five vendors – including TAPCO – at 300 off-ramps for six months. The result? A whopping 99 percent of false positives were from other vendors’ solutions.

With the TAPCO Wrong-Way Alert System, you get: