This article was posted by Nicole Barhorst on September 29, 2021

For over 80 years, the Manual on Uniform Traffic Control Devices (MUTCD) has been the go-to resource for transportation professionals in the United States. Published by the Federal Highway Administration (FHWA) and updated periodically, it establishes the nationwide standards for installing and maintaining traffic control devices – from road markings to highway signs to traffic signals – “on all public streets, highways, bikeways, and private roads open to public travel.”

Thus, every time you drive, walk or bike, you experience the impact of the MUTCD. However, how much do you really know about this all-important manual? Read on to find out.

About a century ago, representatives from Wisconsin, Minnesota and Indiana toured many U.S. states “with the intent of developing a basis for uniform signs and road markings.” The representatives then sent their findings to an organization called the Mississippi Valley Association of Highway Departments, resulting in standards being developed for sign shapes.

2. The MUTCD is older than the Hoover Dam and Morgan Freeman — just barely.

The first edition of the MUTCD was published in 1935, which was a year before the Hoover Dam opened and two years before Morgan Freeman was born. Franklin D. Roosevelt was in his first term as president.

3. The FHWA did not always administer the MUTCD.

4. A new edition arrives every eight years on average.

There have been ten editions of the MUTCD since 1935, and the eleventh edition is expected soon. 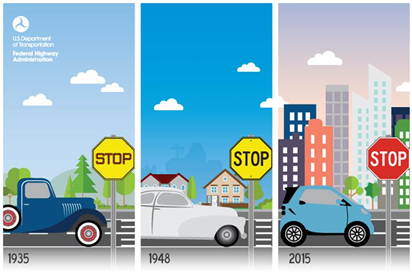 The MUTCD mandated that STOP signs feature white letters on a red, octagonal sign face, replacing the yellow signs that used to be commonplace.

6. School zone-specific signs weren’t adopted into the MUTCD until 1971.

A completely rewritten MUTCD was published in 1971. It included signs specifically for areas near schools, named orange as the designated color for construction signage and mandated yellow markings for separating opposing traffic, among other changes.

The MUTCD has truly transformed public roads throughout the U.S. As you eagerly await the latest edition of the MUTCD, consider all the ways having a consistent, nationwide standard for traffic control devices has improved roadway safety for all.