This article was posted by Robert Kurka on March 31, 2021

Outside industrial facilities, guests and employees frequently cross paths with truck drivers and other heavy machinery operators. Facility managers have a responsibility to protect everyone from these hazards and prevent life-threatening disasters.

Fortunately, there are four popular and proven ways to do just that at industrial facilities.

Standard pedestrian crossing signs too often become white noise and go unnoticed, especially at busy industrial facilities when there are many things for drivers and operators to pay attention to. That’s where a rectangular rapid-flashing beacon (RRFB) crossing system comes in.

RRFBs are amber LED light bars that flash to capture vehicle operators’ attention and provide real-time warning of persons in or about to enter a crosswalk, standing out day and night.

A study conducted at two Miami-Dade County, Florida crosswalks found that RRFBs improved rates of vehicle-pedestrian conflicts, trapped pedestrians and motorist yielding distances, with yielding rates increasing from zero percent and one percent to an impressive 65 percent and 92 percent, respectively.

The TAPCO RRFB system features RRFBs that flash in an attention-grabbing pattern and comply with government regulations, and they can use solar or AC power. Plus, there is an activation option to fit any budget or location:

Infrared bollards: Placing bollards on both sides of the crosswalk causes road users to passively trigger the crossing system. Bollards have a range up to 20 feet and determine users’ direction.

Time clock: With time clock activation, facility managers can set up to 16 activation schedules per day and take advantage of adjustable activation times.

Thermal detection: A bike and pedestrian thermal sensor uses infrared heat profiles to identify these vulnerable road users and activate the crossing system. Customize detection zones and configurations according to each site’s needs and easily integrate this detection method with user-actuated options.

Another way to call attention to foot traffic at industrial facilities is with LED-enhanced signs that detect people in or about to enter crosswalks and flash to alert vehicle operators. This high-visibility, real-time warning can mean the difference between a tragedy and a saved life.

These systems can also use solar or AC power and be activated via push buttons, infrared bollards, time clock scheduling or thermal detection, or they can simply flash 24/7.

A third option to protect everyone at industrial facilities are round amber LED beacons that, similar to RRFB and LED-enhanced signs, increase vehicle operator awareness by flashing when people are detected in or about to enter a crosswalk.

LED beacon crossing systems include LEDs placed above pedestrian crossing signs. On BlinkerBeacon™ Pedestrian Crosswalk Systems from TAPCO, the beacons can be eight or 12 inches wide.

These systems can also use solar or AC power and be activated via push buttons, infrared bollards, time clock scheduling or thermal detection, or they can flash 24/7.

An innovative way to improve visibility in poorly lit industrial areas is with the SafeWalk® Crosswalk Illuminator.

This simple safety enhancement illuminates crossing users from one end of a crosswalk to the other using unique, dual-light technology.

Because SafeWalk® is activated by pedestrians and only illuminates in low light conditions, it conserves energy and prevents motorists from getting so used to the lights that they stop noticing them. 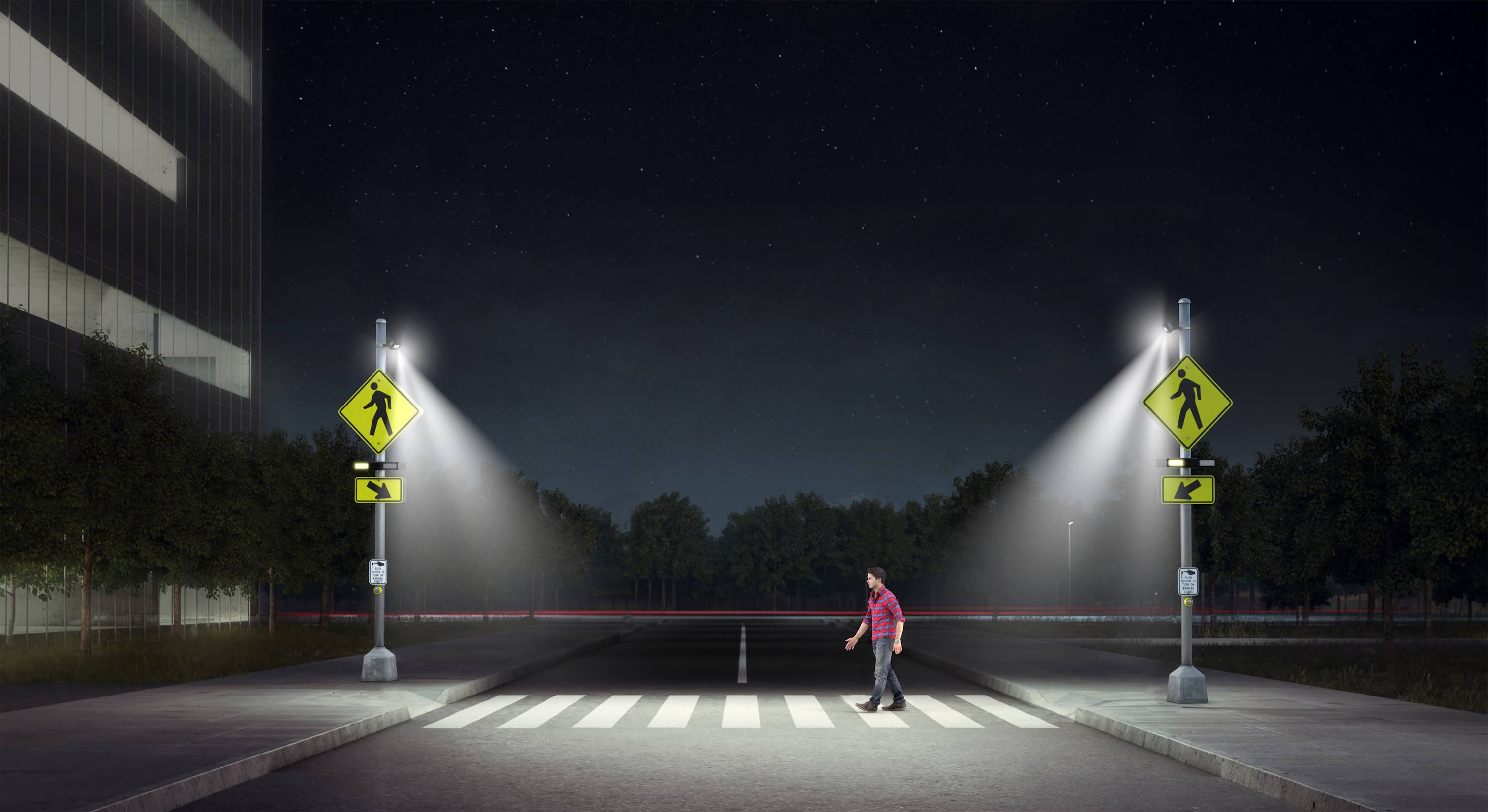 Simply put, industrial facilities can protect employees and guests alike with strategically placed crossing systems and enhancements. Be proactive by researching what solutions make sense for your facility before disaster strikes.